Another demonstration against PHARMAC Another week and another protest against New Zealand's PHARMAC with a new group of patients joining the fight for access to new medicines.

The controversial pharmaceutical purchasing agency has faced increasing criticism from patients, clinicians and politicians for refusing to fund new medicines.

That was followed by a new petition from a parent calling on PHARMAC to fund Biogen's SPINRAZA for his two daughters with spinal muscular atrophy. 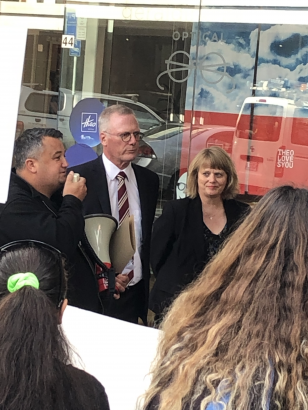 IMBRUVICA has been listed on the PBS for around two years.

A new advocacy group has been created for New Zealanders with CLL and has joined the ‘Right to Live’ campaign for access to cancer medicines.

CLLANZ founder and executive director Neil Graham lives with CLL and has been treated with IMBRUVICA through a compassionate access program.

He said PHARMAC's continuing refusal to fund the drug is not only a death sentence for New Zealanders with aggressive CLL, but "flies in the face" of international clinical opinion and best practice.

“Ibrutinib has been registered in NZ since 2015, and is funded in 44 of 45 countries of similar or lower wealth, NZ being the exception. Evidence for the effectiveness of this treatment is incontrovertible, for example overall survival for patients on ibrutinib at first line is 88%. It’s hard to imagine why the evidence that was so compelling for 44 other countries has not persuaded Pharmac to the same position,” said Dr Graham.

Ben Schrader, who is a trustee of CLLANZ and a CLL patient, is also receiving IMBRUVICA via Janssen's compassionate program and is in complete remission after being close to death in 2016.

“I feel very lucky to be still alive and enjoying a full and active life. But others have been less so. The access programme I was on has now closed, so the only option for CLL patients in the same boat that I was in, is to fund this very expensive medicine themselves. But few can afford it, so the system divides people into the haves and have nots, which is desperately unfair," he said.

“We know this government wants to be transformational. There could be nothing more transformational for thousands of New Zealanders facing imminent death from the diseases represented here today than for the government to fund medicines that could extend their lives and allow them to continue to contribute to New Zealand life in diverse and meaningful ways.

“They deserve the same chance of an extended life as I have been given. They too have a right to live,” he added.